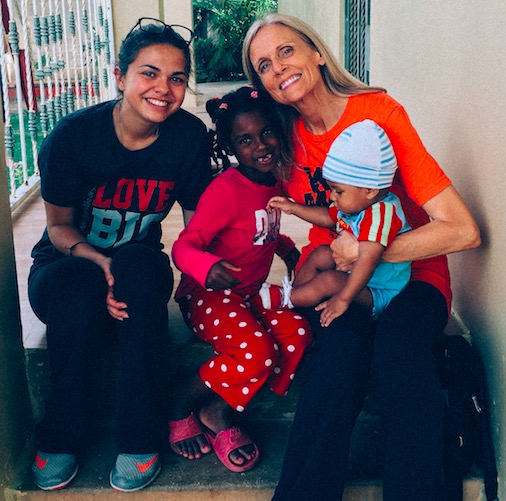 The Man Up and Go team partnered with North Point Church in Springfield, MO, and the ministry of Jeremiah’s Hope (based in Ada, MI), to love big on the folks of the Dominican Republic in late May 2017.

Our team consisted of 15 total members. Participants came from Dallas, Springfield, St. Louis, Tampa, and Michigan, although we actually didn’t physically meet one another until the airport lobby in Santo Domingo. After months of planning and talking on the phone, it’s always a treat to put a face with a name and a voice.

We immediately jumped into serving mode by visiting Pasitos de Jesus, located in between the airport and our guest house in Santo Domingo. Approximately 25 children live at this all-girl orphanage. We played volleyball, soccer, did “gymnastics” and other motions old people shouldn’t attempt, talked, face-painted, and played with these young ladies until the sun set and headed to the guest house.

The guest house is set in the heart of Santo Domingo and is run by Pastor Tito. It’s a unique set up in that it doubles as Pastor Tito’s church (called Kefale) with the worship hall and offices upstairs, and the kitchen, dining area, and bedrooms downstairs. Pastor Tito, along with others, believed God and prayed for this massive building to be theirs for 4 years. They had only recently taken control of it, putting doors on the bathrooms and painting the walls the day we arrived. The team went shopping for breakfast supplies and snacks; each morning was a do-it-yourself smorgasbord of various fruits, yogurts, and pastries.

Over the next couple of days, the men ministered with the Fellowship of Christian Athletes in the DR. FCA is headed by American Luke Sawyer, and there are 7 local affiliate branches under his leadership. Our conferences were held at the Olympic Village in Santo Domingo, and we saw about 45 coaches come to the two-day conference. We fed the men at noon each day, and taught curriculum from The Resolution for Men, a powerful resource that closely parallels the Man Up mantra to love God, your spouse, your children, and your community. By loving God and serving one’s families and communities, we are convinced there will be Less Orphans, More Families around the globe.

The conference yielded great reviews from the FCA staff (12 Dominicans and Luke) and coaches who attended. Each FCA staff member oversees a number of coaches who in turn have great influence over their young players. By using the medium of baseball (highly regarded in Dominican culture) to share the Gospel and disciple believers, FCA is reaching a segment of the population for Christ that very few ministries can. Man Up’s decision to partner with FCA is the result of strategic alignment with our mission to energize and equip men to fight for the fatherless. When men take responsibility for their personal relationship with God, they are then able to take care of their families. Once they can take care of their families, there will be fewer orphans on the streets. With continued discipleship regarding God’s heart for the fatherless, we believe many of these men will end up fostering or adopting those who are not biological children.

One of the highlights of the conference was a 50-something old coach named Enrique. Jovial and loud at the onset, it was obvious he was just there for the free food and because some of his coaching buddies were there. But over the course of two days, his heart softened. He literally got down on his knees in a breakout session and showed how he felt torn between being the man God wanted him to be and going back to hanging out in bars with his friends from the neighborhood. In what can only be called a miracle, after 30 minutes of battling the Holy Spirit, Enrique prayed to receive Christ. The FCA coach responsible for him is following up to make sure Enrique is discipled.

The ladies spent time with Pastor Tito and another local pastor, Kendar. Pastor Kendar felt called to begin his ministry on a literal trash dump in Santo Domingo, just next to a river that splits the town. The residents of the dump have built homes on top of it and earn the subsistence by filling up horse-drawn wooden carriages with other people’s trash. They are, in effect, waste removal specialists who then live off what they remove and dump the rest outside of their homes.

Pastor Kendar is filled with God’s Spirit for these people, and is passionate about reaching them through education and entrepreneurism. He started a school within walking distance that meets in his home – about 25 elementary-aged children – and works with the parents to change their mindset of hopelessness by offering the hope of Jesus. Our team was able to feed, play and interact with the children, while some of the women shared with and encouraged the women of the community with their personal testimonies.

From there the team travelled west to the town of Barahona, a 3 hour drive by bus. The team bought groceries and visit some of the families of Jeremiah’s Hope, including a young man, Rafael, who desperately wanted to “Man Up” for his 4 kids and spouse, but whose pelvis had been crushed in a motorcycle accident. Another family we visited had multiple health issues and lived in materially poor conditions. Despite these setbacks, it was a joy and honor for them to host our team in their homes as we visited with and prayed for them.

The next day we took a short bus ride to the village of Barahuco, and interacted with the children under Pastor Pive’s care. The children who come to his church often receive only two meals/week, provided by Pastor Pive and his ministry there (Pastors Pive, Tito, Kendar, and Luis all serve on the board of Jeremiah’s Hope). Our team had a blast playing with the children there. Late rains brought a torrent of rushing water on a nearby river, and the team spent a substantial amount of time watching the kids play in the water and then jumping in ourselves! As a testimony to the strong currents, two team members lost rings in the current, one of which was a wedding ring. But hey, #yolo, right?

Once lunch was prepared we conducted a feeding program with approximately 150 children from the community, and spent the rest of the day playing with them and loving big. We prayed over Pastor Pive, who so obviously has a sensitivity to the things of God and a compassion for the fatherless in his community. It was a joy to serve there and our team has many memorable moments from that time.

From there we had dinner at a spot called Playa San Rafael, eating fresh fish caught just hours prior from the Atlantic Ocean, a stone’s throw away. This popular destination features beautiful pools of water from the nearby mountain streams, and served as a time of team bonding and refreshment for the home stretch.

The last full day of ministry started at a local park where we met about 75 children who attend school under Pastor Luis’s care in the downtown district of Barahona. These children, beneficiaries of Jeremiah’s Hope, would not be able to afford school otherwise. Our group broke and played with these kiddos for several hours before having lunch – looking around, some were playing sports, others were racing, some were jumping on an abandoned horse cart, others were blowing bubbles or affixing stickers or just sitting and talking. While many of these children do have parents, others do not. A few hours of undivided adult attention help strengthen their sense of value and purpose in the world.

After the 3-hour bus drive back to Santo Domingo, the team was able to do a little shopping at the local market and eat at the Payan sandwich shop, a winner-winner for the entire team; after that it was back to the guest house to pack up and be ready to depart the following day.

On Sunday morning we worshipped with Pastor Tito. Pastor Brad from North Point Church preached a message on “Leaving a Legacy,” and even had a couple of jokes turn out okay in front of the Dominican, Spanish-speaking crowd. It was a sweet time of cross-cultural worship of our eternal, multi-culture creating God!

Not mentioned above was our worship with Pastor Tito on Wednesday evening. In an impromptu outdoor gathering, the message of Man Up clearly resonated with both the women and men of Kefale. Multiple people stood up and testified to the need for our message, including women who publicly repented of usurping their husband’s spiritual leadership role in the home. We were encouraged and the Church was strengthened during this time.

In all, the Dominican Republic Man Up and Go trip with North Point Church proved a tremendous success. The eternal impact won’t be known for a while, but the immediate effects of mutual edification and encouragement were evident to all. We’ve been invited back as soon as September to share the message of Man Up. We pray for God’s wisdom and discernment as we further partner with God’s Church in the DR.