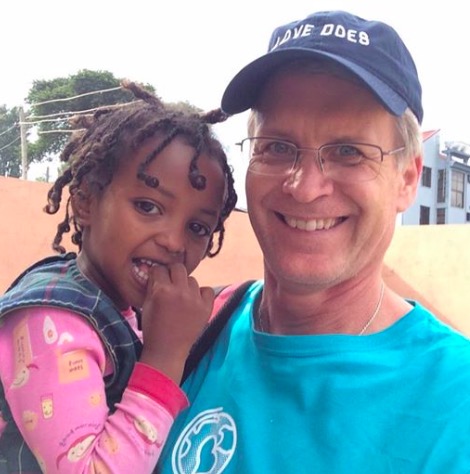 God Is Moving in Ethiopia!

(The following blog post was written by Man Up and Go trip leader Shane, who helped lead our team to Ethiopia August 10-22, 2017.)

Our team consisted of 6 total members – two from Dallas, two from Springfield, and two from Tampa, FL.  After several months of planning and praying, we all connected in Newark, NJ.  It was nice to put a face to a voice.  Everyone looked so fresh and excited for our trip…at least that was before we boarded the plane for our 17 HOUR flight from Newark to Addis Abba!

Ethiopia is where it all began in 2011 for Man Up and where the majority of the children adopted by Board members were born.  We have been praying for 4 years for the right partner in country so we could return.  Ladies and Gentlemen, the prayers of righteous men and women avail much and God did not disappoint!  Right after we got through customs, we were met by Henok and his crew. Henok was one of the workers with Mission Ethiopia who we met translating for us on our first trip back in 2011.  Now, he and his fearless band of do-gooders are providing jobs for the people of Korah to create amazing, high quality products for the world…more on that later! Henok and his team quickly whisked us away to his spacious, well-appointed guest house called the LightHouse where we could get hot showers and good sleep before jumping into the thick of things on the next day!  Boy, did we ever jump in—both feet!

After an early morning workout for some and a fabulous breakfast for all, the team headed out to Korah and Carry 117, a business founded by Henok that employs women by teaching them to sew and getting them off streets.  It’s hard to imagine that just a few months earlier over 100 people lost their lives due to the tragic landslide.

It was so encouraging to spend time with the workers of Carry 117 (Divine intervention: the organization had just moved their offices only a few weeks before the landslide that would have covered their former building—God is amazing!).  The women and only male employee were so full of the joy of the Lord and very grateful to be alive! They were also very excited to have just received 4 brand new sewing machine due to the fruitful fundraising of one of our team members. This member single-handedly raised enough funds to not only get the machines but also endow two small leadership development funds.

Later that Saturday evening, we met with Pastor Addis and the leadership team of Sidist Kilo, one of the largest churches in the area and our hopeful partner for our work in Ethiopia.  At first, it was a little tense as the leadership was trying to figure out the main thrust of Man Up and how we would address the significant pressure they believe exists with respect to endeavors to empower women sponsored by the UN and other NGOs in Addis Abba specifically and Ethiopia in general.

It was helpful to have a woman on the team to speak to how she sees Man Up promoting the protector, provider, and partner role of men.  With her endorsement, the sweet fellowship of the Holy Spirit, and continued dialogue, we all left feeling very good about moving forward in developing our partnership.

The next morning Jeff (Man Up’s CEO) and I were scheduled to deliver the morning messages at the two churches in Addis Abba.  Only one—well two problems: neither of us had a suit, dress shirt, tie, or dress shoes! However, our wonderful host came back late that night with two suit/jacket combos so we could speak and not distract too much by our attire. The Spirit moved mightily and nearly 70 people put their faith Jesus, along with exorcisms for a few new converts (we’re not in Kansas anymore Dorothy!).

The next day, the team had the privilege of meeting with some of the leadership of the Ethiopia Assemblies of God, (EAG) and also visiting one of their ministries called ADA, a non-profit agency providing low income and orphan children schooling, feeding, and other support.  ADA also operates their Women Economic Empowerment program that provides empowerment, skill trainings, micro loans, etc., to widows and single mothers.  Later that evening, we met with the men of Sidist Kilo to give a general overview of Man Up and what we hope to do going forward in, with, and through our growing relationship with Sidist Kilo.

Tuesday morning, the team purchased a few goats as part of the feeding service we were doing with one of our new partners, Glory to Glory (GTG), a small church in the “poor” area of Korah consisting mostly of orphans, lepers, prostitutes, and those living on the streets.  We were able to tour around Korah and also spend some time at Carry 117.  When we returned to GTG in the afternoon, we were able to serve the meal to the members of the GTG and the surrounding community.  A meal with meat is a rarity for most of the people of Korah and was well received by all.  Over 100 people were served!  Later that evening, we were able to attend a marriage event put on by Sidist Kilo as a launch for an initiative to build strong marriages and families in their church!

Wednesday we met with the leadership of GTG and discussed investments Man Up could make to provide them with a sustainable source of income.  After a lengthy discussion we concluded their first enterprise would be to set up an injera-making operation.  Injera is a bread staple in Ethiopia made from fermented teff grain.  We’re excited that there are leaders ready and able to step in and supervise this new program.  We look forward to receiving many updates on their success!  In the afternoon we did home visits in Korah and had coffee in the home of a wonderful woman Man Up met in one of our first trips to Ethiopia.

Thursday and Friday were spent loving on the workers of Carry 117 and helping them improve operations. From helping to purchase and build a better manufacturing table, to providing pampering for the women workers to enjoy a “salon day away,” we just wanted to meet their needs and were grateful to do so!  For some of the women, they had never had their hair or nails done before in that type of setting.  It was truly a joy to be part of providing something special for them and their genuine gratitude was humbling!  Friday was feast day!  We purchased a couple more goats and played with the children in the neighborhood while the meal was prepared.  Through this event we were able to feed over 70 children plus some parents and others from the community.

On Saturday the team, less one who had fallen ill, was able to get out of the city and spent some much-needed time relaxing and reflecting on our time so far in Ethiopia.  We took a 2.5 hour drive outside of Addis Ababa to a beautiful hike, crossing a 15th century bridge, leading to gorgeous waterfalls and breath-taking views overlooking the Blue Nile section of the Nile River.  Great time to be with God and the works of His hands and be reminded that He is still mindful of us!

Sunday was a special time to be back at Glory to Glory to worship with them.  After some powerful speaking (well past our US 45-minute presentation), the team was blessed to serve the people of Korah by washing the feet of those in the congregations; both young and old came forward.  The prayers exchanged, hugs, and even tears of thanksgiving to our one God was a testament to the supernatural power of the Holy Spirit to transcend language and culture and exemplify the unifying bond of Christian unity.  It was truly an experience that words fail to fully express.  I believe it will forever change the lives of those who washed and those whose feet were washed.

On our last day, Monday, we made some time to get over to Out of the Ashes, a school for 450 orphans and kids as well as housing for some, from Korah where we played a few games of soccer and led a Bible Study with them.

We were also able to meet with the leadership of Glory to Glory to purchase the Injera production machines and supplies to get them up and running!  Then we wrapped up our time saying our “see you laters—either down here or up in heaven” to our new friends and partners in Ethiopia. Tired but extremely blessed to have been a part of these amazing 10 days, with giddy anticipation of what the Lord is looking to do in and through us in the near future, we boarded our plane heading back to the US.