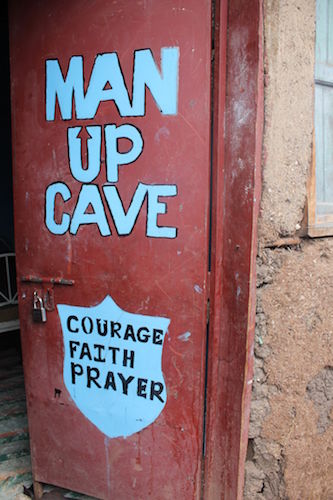 Men Live in the World, Strong Men Change It

The following blog post is written by Roger Gibson, Man Up and Go Founder and Visionary. Roger currently serves as the Senior Director of Adult and Family Ministries for the Assemblies of God National Office. He is married to “Kiki” and has three children. Read Roger’s bio HERE.

He was deemed too short, too slow, and considered by his owners to be lazy. His owners quickly gave up on him and wrote him off as useless until a very special man came into this horse’s life. Instantly, the gentleman saw tremendous potential and knew this horse was very special. Nobody else could figure out why he decided to invest his money and time into a horse that was clearly a loser. But he didn’t care what others thought.

He knew when he looked at the horse in the eyes that he possessed a tremendous amount of potential, determination, and desire. All he needed was the right kind of leadership, solid training, and an opportunity to be the next champion. The horse went on to become the legendary winner, Seabiscuit, who inspired hope for so many during the Great Depression.

My wife, Kari, and I spent a year and a half living in Ethiopia, Uganda, Haiti, and Nicaragua serving and caring for orphans. During that time, we listened to a lot of their stories. Every story was unique, but they all had one thing in common; their story began with a tragedy from the loss of a parent(s) due to diseases like AIDS and tuberculosis, extreme poverty, natural disasters, war, abandonment, severe abuse, religious persecution, and more. Even though each situation was heart breaking and complex, I learned something that forever changed my perspective of the most vulnerable people group on earth.

“Both Scripture and social science affirm that the very best environment for a child is a caring family.” Jedd Medefind – President, Christian Alliance for Orphans 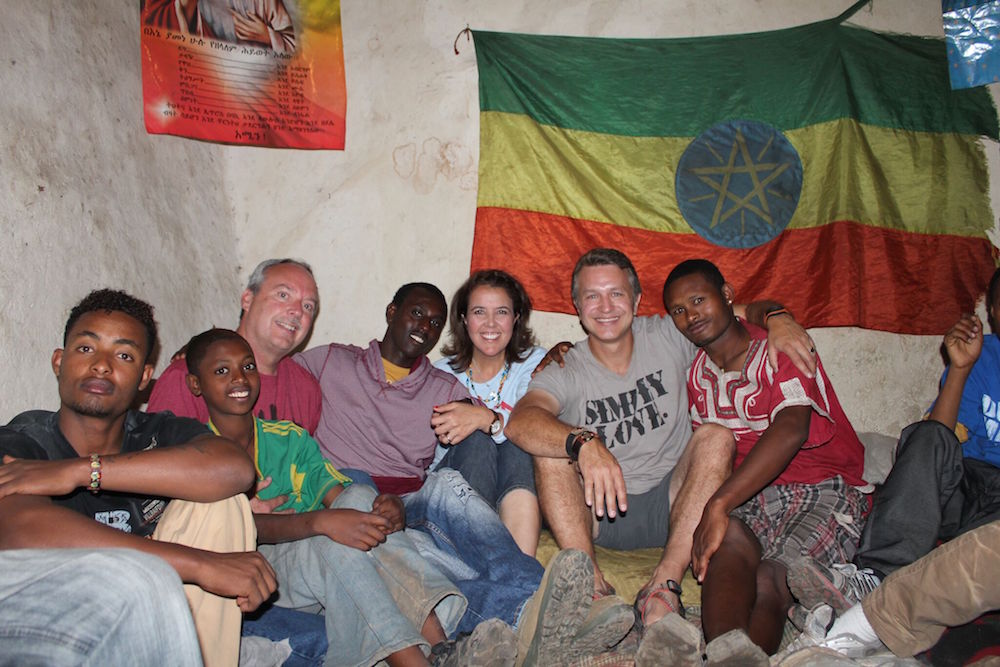 While in Ethiopia, I led a Bible study for 12 weeks for boys and men ranging in ages from 13 to 25 years old. There was wide spread in the ages, but they each had desire to learn more about what it meant to be a Godly man. They eagerly came to our meetings with their Bibles, pens, and paper ready to learn from the book of Daniel.

For me, the book of Daniel is the ultimate warrior’s guide. It’s filled with men who displayed big faith, courage, and prayer. I was surprised by how successful it was. As I looked into their eyes, I could clearly see how they were soaking in every word I said. Not a single boy missed a meeting.

Because of the success of our study on Daniel, I then decided to do take the boys through a special study on how a man loves his wife and children. What was so shocking to me while walking through this study was just how uninformed these boys were about this topic. Sure, there’s a distinct cultural difference. But I wondered if this group of men ever thought about or pondered upon what they were about to learn. It never crossed their minds to resolve conflict in a constructive manner, as opposed to using their fists or just abandoning their families. It made me think about the quality of examples they have had. Who were their fathers? Did they show them any love? Even though I had them for a very short time, and it would take years of counseling to allow these boys to heal, it was my mission to be their role-model and raise a new generation of dads.

Nothing was as memorable as our very last meeting. My good friend, Don Henry, came to visit us for a week in ministry. The week prior, we concluded the study, but I promised the boys I would do a special blessing ceremony. In their book, The Blessing, my father-in-law, Gary Smalley, and Dr. John Trent illustrate numerous studies on how crucial it is for a boy to hear this to signify their passage into manhood.

One of the most important jobs as a dad was giving this to my own son, Michael, when he turned 13 years old. I couldn’t leave Ethiopia without extending this to my group. I gave them a quick explanation on the meaning of blessing and closed in prayer not really thinking much about it.

The next week, Don and I showed up and discovered a room full of boys and men who wanted to experience their own blessings. This simple commission had spread like wildfire throughout this small community. Again, I explained what it means to have a blessing. During the invitation, all of them stood and formed a line to receive their blessing. 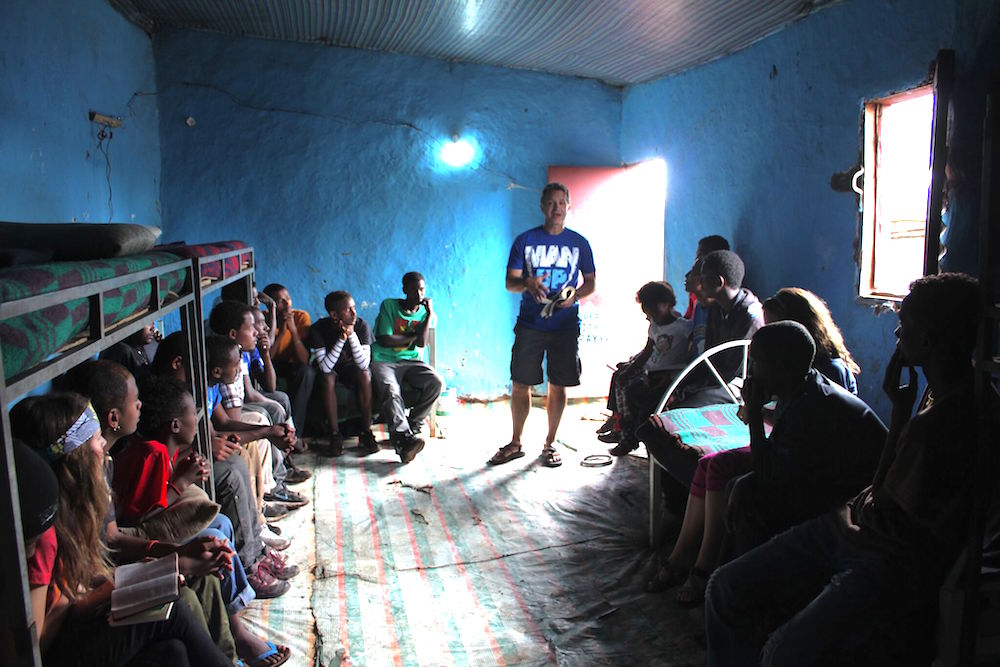 It was such a sacred and meaningful time. We prayed a personalized prayer over each man, anointed them by putting the oil on their foreheads, and prayed blessings over their lives. For me, it was an overwhelming experience to see the need for men to learn what it means to be a Godly man.

Man Up and Go’s desire is to be a part of the solution. Rather than being a Band-Aid that can easily fall off, we want to heal and protect the broken. Our objective is to shape a better future for orphans by making Jesus known, being a father to the fatherless, and equipping each man to take personal responsibilities for his faith, family, and community. We want to see less orphans and more families. We believe the best offense in the orphan crisis is to focus on the men in countries where the most vulnerable children reside.

A lot has happened in the days, months, and years since our first trip to Ethiopia and Uganda in 2011, which inspired the award-winning documentary film, Man Up and Gothat featured five men from Missouri who pledged to love and protect the fatherless. This film also inspired the non-profit, which bears its name, Man Up and Go founded in 2014.

Today, I am proud to say that over 8,000 children have been reached in Ethiopia, Uganda, Haiti, and Nicaragua. We have ministered to over 1,300 women and equipped 3,000 men with the tools they need to be righteous men of God. And the best news of all is that it is just the beginning.

The program we started in Uganda is designed to give men the necessary education and training to love, provide, and protect their families. Why men’s empowerment? Unfortunately, we have a generation of men who lack positive male role models in their lives. This is a worldwide pandemic.

If we want to break the cycle of fatherless homes, we need to run full speed towards the finish line of reaching the next generation of men. We love and advocate for women’s empowerment due to the failure of men to live up to their purpose. We have partnered with Convoy of Hope because of their great success with their program.

But, if we truly want to change homes, communities, and countries, we have to reach the men.

Man Up and Go invites you to join in the journey to create less orphans and more families through our Reach, Equip, and Release strategies:

Think back to my original word picture in the start of this article. Imagine you received a tip that the next great CEO, President of the United States, scientist with the cure for cancer, physician capable of healing the most rarest of diseases, evangelist capable of leading thousands to the Lord – or even the next Nelson Mandela, Billy Graham, William Wilberforce, Dietrich Bonhoeffer, Martin Luther King, Jr., and John D. Rockefeller was in your reach of influence?

Would you take them under your wing?

Would you give them a shot at accomplishing their greatest potential?

Would you believe in them?

The truth is, the field is ripe with potential. Just like Seabiscuit, each boy or man currently benefiting from Man Up and Go has what it takes. They just need the proper training and an opportunity.

It’s a big prayer request, but we believe in a big God who is able to do immeasurably more than we can ever dream of.

Would you like to join us in helping save families and raising up a generation of world changers?  Man Up and Go has partnered with caring people like you to provide for men, women, and children to make a better tomorrow by loving and protecting the fatherless. Together, we can encourage the world to follow God’s design for the family and provide lasting and healthy homes for every child.

Through your gift today you will help many families to stay together. There’s never been a better time to make a gift, so don’t wait! Please use our DONATE page today for your tax-deductible gift.