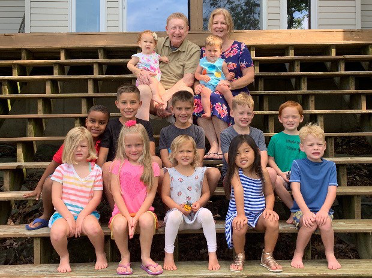 Thank you all for joining us for another #PRAY127 Monday. I apologize for not sending one out last week. The reality is that two Mondays ago, April 13th, I received a sobering message from my sister (who, along with her family, is currently living with my parents while she and her husband are on furlough from Africa as missionaries) – she told me that my father had maybe two weeks to live.

My father was diagnosed with pancreatic cancer in May of 2019. None of my relatives have died from cancer, which is an oddity considering the prevalence of it worldwide, so this was uncharted territory. I quickly learned that even though it was Stage 1 at the time, once pancreatic cancer is present, it’s usually what eventually kills you.

Despite modern medicine’s best attempts, I struggled to watch my father deal with the nasty regimen of drugs given in attempt to save his life. I dealt with a certain amount of guilt living in Florida while all of my other siblings were in driving distance of St Louis, his home for the last 24 years. I also struggled to deal with my own unresolved issues with this man who would be my father for 42 years, as it turned out.

In the end, God was gracious to me and led me to Psalm 128 in the weeks leading up to his death. Psalm 128 is a song of ascents, which is to say that it’s the kind of song that was sung as pilgrims walked up to Jerusalem to “make their way home.” It was fitting, because for those of us who know Jesus, we’re all on our way home:

When I read this Psalm, it had Pops’ name all over it:

When I heard the news on Monday the 13th that time was short, I booked a flight and was up there by Wednesday. He was still walking (albeit slowly) to the bathroom and could still squeeze out a few phrases, though it definitely seemed to wind him. On Friday night our family gathered around his bedside – all four siblings and our mother – and we told him it was okay. Okay to go. Okay to be with Jesus. Okay to stop fighting. Everything was cared for. He could let go as our Protector and Provider. Each of the children spoke, and then we prayed over him together.

On Saturday he was still kicking and silently feisty, so I made my flight to Tampa. The next morning, I got a text from my sister that he had breathed his last. You could’ve told me Dad! I booked another flight and was up there Sunday night. (Hence, Monday morning I was dialed into my family and did not get out a #PRAY127 email.)

The funeral on Tuesday was limited to just immediate family because of COVID-19. And just like God does, what seemed to be a hindrance turned into a beautifully private moment for our family. My brother, a minister himself, conducted the service with skill and hope. All the siblings spoke. We sang three hymns, and my brother even played the trumpet for Pops’ sake (Dad had played the trumpet in the church band for as long as I could remember). Afterwards the funeral director – Candace – told me how much the service spoke to her and had given her hope, as she had lost her father just two weeks prior.

Why do I tell you all this? For what am I asking you to pray? Well, it has dawned on me that I myself am fatherless now. This side of heaven, I won’t ever again go to him with a question, a piece of advice, a “What should I do?” or “How would you?” moment. Sure, it’s different than growing up an orphan. Yet in this moment, there is a void I feel that only the fatherless can know.

What about the 150+ million orphans in the world? What about the 700+ million fatherless children, those without an active father-figure in their lives? I know it’s a big number, but can we pray for them today? After all, this is why Man Up exists – to fight for the fatherless.

Maybe you could say a prayer for my mom, too; after all, she’s the second half of James 1:27. When a child is made fatherless through death, a mother is made a widow.

Thanks be to God, who gives us the victory through our Lord Jesus Christ!

P.S. Please pass this email on to those who might be interested in praying with us each Monday. They can sign up to receive these emails here: https://manupandgo.org/pray12