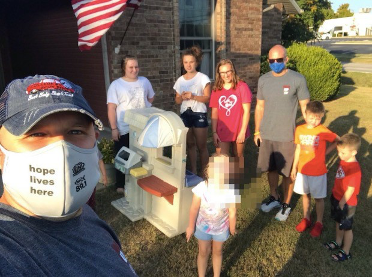 Last week we prayed for the 29 foster or adoptive families who have enrolled in our Adopt a Family program for the new term. This week I’d love for you to join in praying for the men who are serving these families through our Man Up 100 program.

We live in a world increasingly hostile to masculinity, and perhaps, rightfully so. In fact, I did a straw poll among some women I know a few weeks back and almost all of them viewed the word at least in part, negatively (and these were Christian women). I think this comes from two main factors.

Now if we go by a particular culture’s definition, then we have a moving target. What one culture tolerates another may not. We can no more call men making women wear burqas (Islamic culture says) toxic masculinity than we can forcing them to walk 10 feet behind us while going for a Sunday stroll (some far East cultures say).

And what if culture changes, like it has in America? How do we know what’s accepted as legitimate and what’s not at any given time?

Christians and unbelievers belong to two different worlds. The bible calls Christians “strangers and aliens on the earth,” misfits looking for their homeland (Hebrews 11:13-16). For an unbelieving culture, this world is all they have. They live according to standards, dictates, philosophy, and worldview that have no hope for anything better after death.

This is why revolutions come about, nations rise, fall, die, and are birthed again. It is all a temporal power grab that generally brings happiness for a few and a life of subjugation for the rest.

Which is why we can read the words of King David in his blessing to his son Solomon with confidence, when he said:

Be strong. Act like a man. Obey me. Then you will prosper.

In a nutshell, this is why Man Up exists. To see men “Act like a man,” which, in a biblical context, can be interpreted as being a protector of those who may be vulnerable to attack (“being strong”) and doing life in community with God (ie, “walk in obedience”).

The men enrolled in our Man Up 100 programs are trying to live out David’s charge to Solomon – to be strong and protect the fatherless, to act like men and care about others, and to obey Jesus and walk in harmony with Him.

This, says God, is masculinity.

These are the masculine qualities. These are the qualities of men. They are not a moving target, but are fixed and immutable; when we protect the weak, care for others, and walk humbly with God, we are living out our diving calling as men. Strong, humble men.

Will you join me this week in praying for the men in our Man Up 100 program? In the first month of the new term (Sept), we have 76 enrolled men who are giving financially and actively serving foster and adoptive families in two different locations (SW Missouri, Tampa Bay). In just one month, these men have:

This is really cool stuff. It’s practical, it’s tangible, and it’s befitting a man. A strong, masculine man, the kind who humbly gives of his strength for the benefit of others. All of this in obedience to a God who loves him.

Thank you for praying for these men. You might not know them by name, but God does; He can’t wait to empower them because of your prayers!