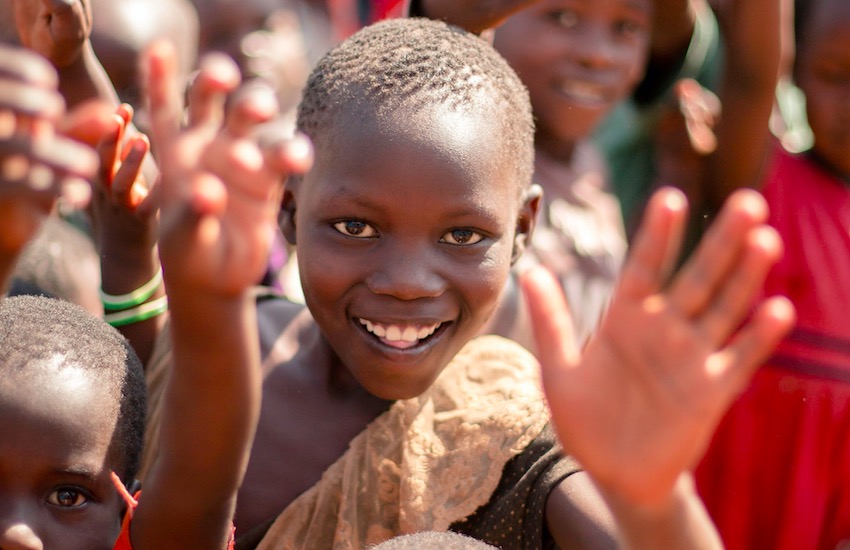 Last month we sent a team of 8 men and women to Uganda for three main purposes:

1. To host a Woman Up conference for the women associated with our partner ministries.
2. To participate in the graduation ceremonies of our first ever AMP Cohorts in Uganda.
3. To deliver gifts to children from their sponsors. 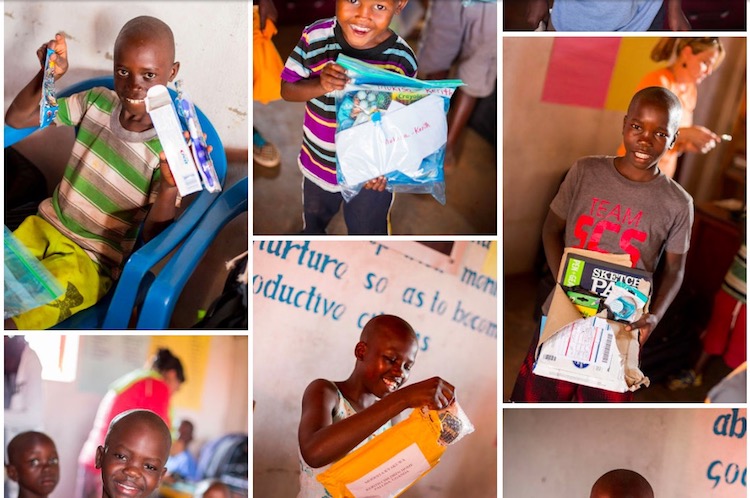 Thanks to those of you who invested in our mission–both through prayer and financing–to Uganda this month. I want to let you know what I saw and experienced there. 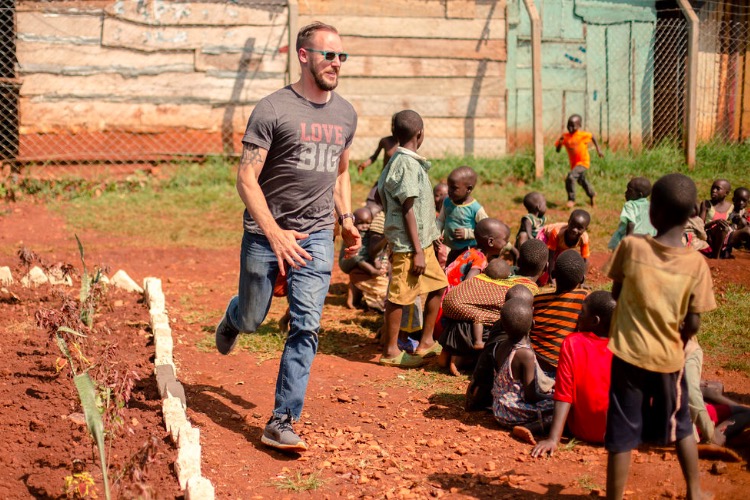 The number one reason we were there this trip was to celebrate the graduation of the first Authentic Manhood Program (AMP) for men. AMP is a year-long discipleship and training program initiated by Man Up and Go. It incorporates discipleship material from the book, The Resolution For Men, which was a product of the Kendrick Brothers’ hit Christian movie, Courageous. The men meet in a small group once a week and cannot miss more than two sessions if they want to continue!

In addition to this training on how to be a godly man, husband, and father, a big component is the second half of the year, where the men are coached to identify an income-generating activity (IGA) that will become a small business so they can provide for their family. Man Up loans them $200 U.S. (which is a lot in Uganda), to help them get started. Within two months they are expected to begin paying the loan back. 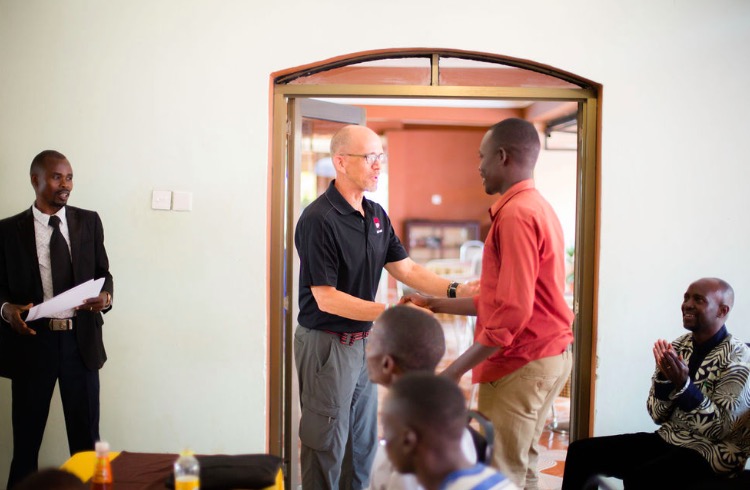 The training took place in three different cities. While we were there we conducted a graduating ceremony in each city with a meal for the men and their wives. It was incredibly satisfying to hear both the men and their wives give testimonies about how this program had changed their life. On average, only about 50% of the men officially graduated, because you have to have paid back the entire loan to be in that status. But repayment is ongoing and the spiritual changes that have taken place so far are exciting. We also kicked off a new training year in each city, with an average of 17 men per city who are getting ready to begin their year of discipleship. 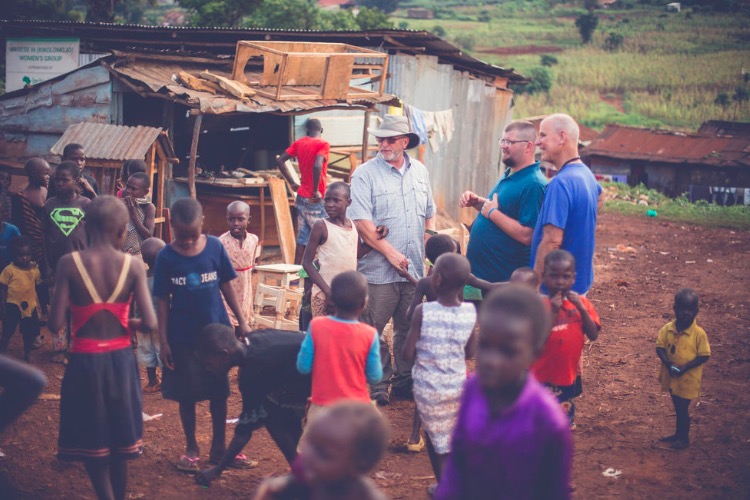 AMP is something that, over time, could be a game-changer for hundreds and even thousands of men in Uganda!

I was blessed to have the opportunity to speak into the lives of some of these men and the leaders and to help them understand that this is really at the heart of Jesus’ command to “Go and make disciples of all the nations.” (Matt 28:18-20). It’s his way of reaching the world.

I was also privileged to preach at the Gloryland church on Sunday near Jinja.

You can see from the pictures attached that we also had lots of opportunity to love on orphans in all three cities, and we participated in the weekly Super Saturday feeding of close to 400 little ones in Jinja, who don’t get much to eat in a given week. These are precious children and many are being taught at the Christian schools in each of those cities. 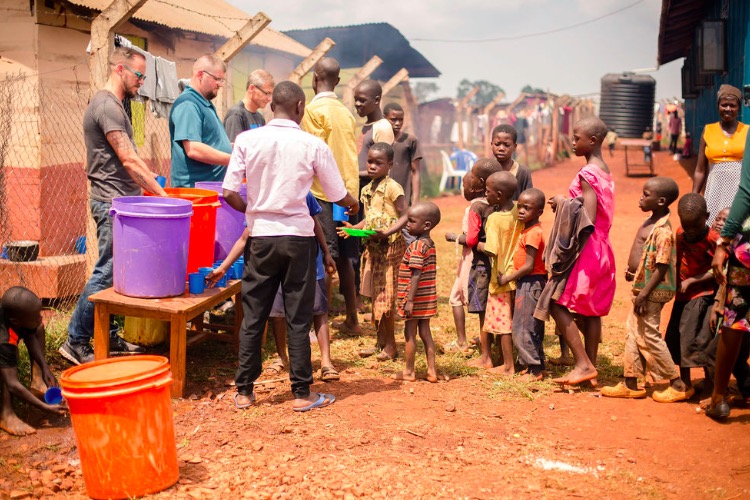 Finally, one huge highlight for me was renewing a relationship with a young Ugandan who is currently studying at the Jinja Baptist Seminary so that he can dedicate his life to planting churches in Uganda. His name is Patrick Ogwang and he is godly, humble, joyful, brilliant, and well grounded in solid evangelical theology! While I was there I gave him copies of two of my all-time favorite books, one by John Piper and the other by Tim Keller. In addition, I gave him a smartphone with a Kindle app on it full of great Christian books that require no internet connection to read. (It is expensive for these folks to get on the internet there.) Patrick was absolutely thrilled with these gifts, because he greatly values good teaching. I plan to do my best to build into this man’s life from a distance as he matures.

In general, the Christians in Uganda are very joyful, humble and teachable people. They greatly appreciate our ministry there. 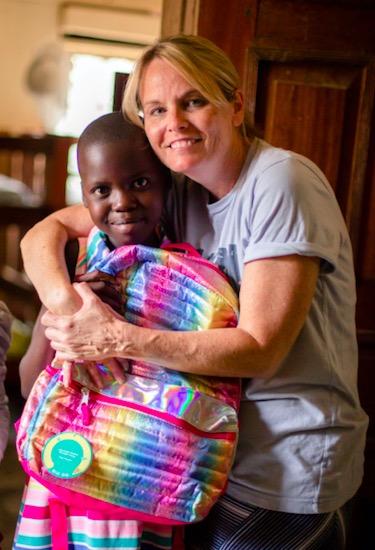 So I want to thank you from the bottom of my heart for praying for this trip and for supporting it financially. It was a worthy investment and I believe it will pay dividends for years to come and on into eternity.

Thank you for your prayers and interest in the mission trip with Man Up to Uganda. I got back last Saturday. The trip was a huge learning curve for me. Having served in Europe and Asia, going to Africa a very different experience. It was very encouraging to see and experience the ministry and impact of Man Up & Go in Uganda. The church in Uganda greatly respects and appreciates their work.

Usually on a mission trip, I have sufficient internet connection to send out prayer letters on location. In Uganda, this was not the case, so you are getting a summary of the entire trip in one letter.

The timing of our trip was primarily driven by the “graduation” time of men completing Man Up’s Authentic Masculinity program, in which men learn how to have a Biblical marriage and become better husbands and fathers. We were also there for the launch of new “classes” of men entering this 2-year program. We were able to take part in several of the graduations. It was so encouraging hearing these men share how the course changed their marriages for good. It was very special to see some of the wives stand up and bear witness to changes. 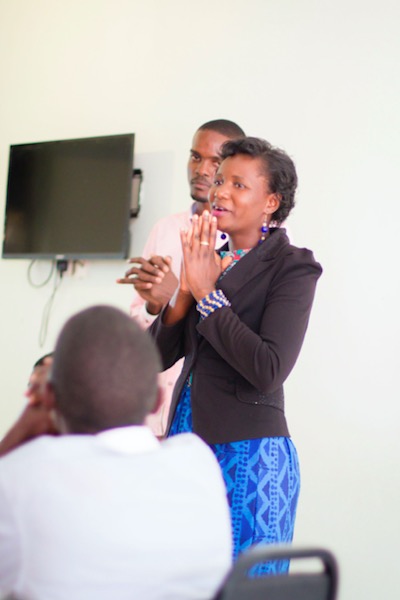 Here are a couple of the groups with their certificates of completion.

In addition to the Authentic Masculinity program, we had the chance to be involved in various other ministries. We visited two orphanages and spent time with the children. HIV is a huge problem in Uganda. 6% of all Ugandan adults (ages 15 – 64) are living with HIV. That amounts to 1.2 million people. Many parents die leaving their children on their own and that raises the need for orphanages. When we would visit the orphanages, I was able to perform magic for them, either close up, one-on-one magic when I was talking with the kids, or as a show for the whole group. 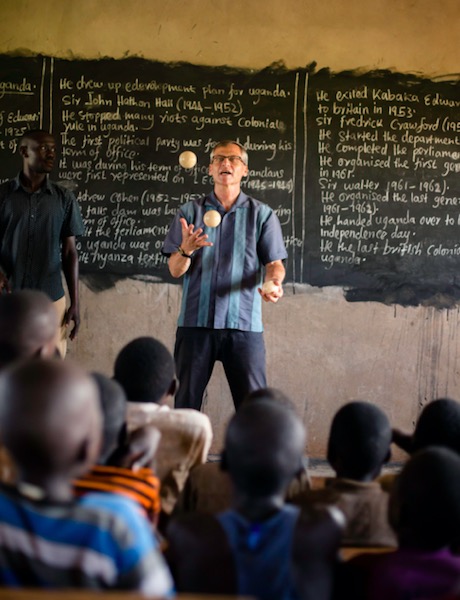 I had the opportunity to speak at a marriage conference for pastors and their wives. The topic they wanted me to speak on was the “Marriage Covenant”. I did the tear and restore newspaper trick, talking about the importance that even if there are things that happen in marriage that would tempt us to divorce, we need to remember that marriage is a covenant and it was created by God and we need to follow His ways and rely on His enabling to keep the “Marriage Covenant.” 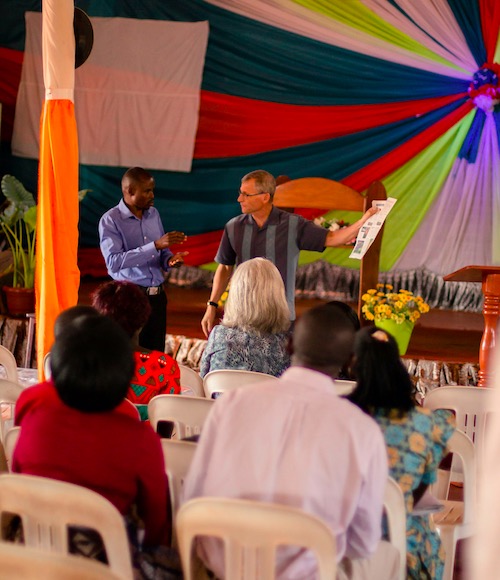 We also worked with a feeding program that happens on Saturdays. There are hundreds of children that show up for a plate of rice.

We also had the opportunity to hand out food in a local village. Pastor Matthew translated as we spoke with the people.

From what I saw, the motorcycle seems to be the most popular mode of transportation in Uganda. You can see below how they have excellent balance when they ride them. I personally declined the opportunity to ride 3 on a motorcycle, but I did catch a ride once — just me and the driver. 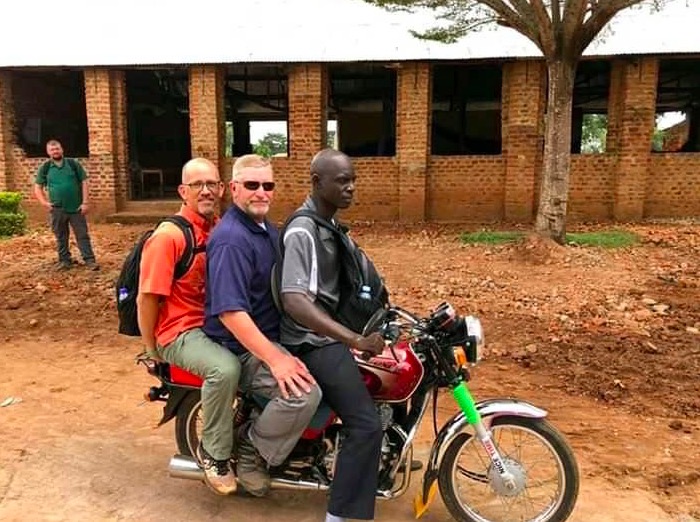 We stayed in the city of Jinja for the first few days then we traveled to Pallisa, which was a 3 hour ride out of Jinja. As we were leaving the city limits to the more rural areas there was a huge difference. Living in mud and straw huts wasn’t anything like life in Jinja. I saw folks in the fields farming with hand tools and I saw a farmer plowing with a yoke of oxen.

Thank you for your interest in missions and for your prayers during this trip. Missions is priority to the Lord. Let’s make sure we are involved in some way in outreach, whether it be by going or by supporting. Now is the time share the Gospel. That is one thing we will not be doing in heaven so let’s make sure we keep it as a priority while we are here. As the Lord Jesus says “If you have done to the least of these you have done it to Me.”

I recently returned home from my third trip to Uganda, Africa. I have so much to share however I can’t put it all into words yet. Imagine that, me at a loss for words. 😉

One of my highlights was meeting a beautiful woman named Sarah. I met her at one of the conferences I spoke at. 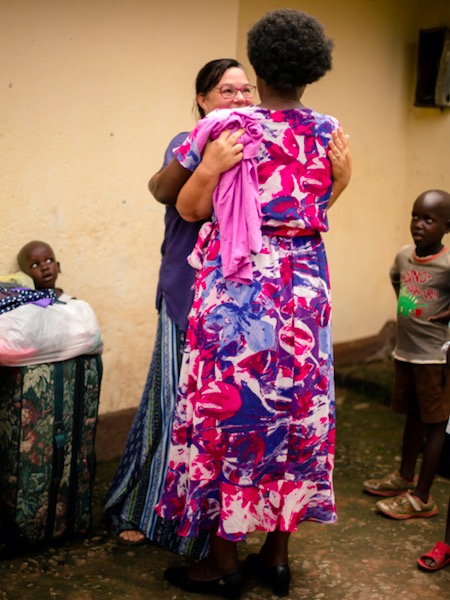 Sarah shared her hard story with me of how her husband abandoned her and her children leaving her bitter with God.

One of the local pastors that Man Up and Go partners with (the ministry I went with) invited Sarah to church and there she repented and received God’s forgiveness and healing.

Sarah longed for her marriage to be restored but her husband married her sister instead, leaving Sarah deeply wounded and questioning her faith. [Read the rest of Tina’s blog HERE.]

This past month I made my second trip to Uganda with The ManUp and Go Organization. What a blessed time it was. The overwhelming sense of love and surrender was heavy. Here’s my story.

I had originally planned to go from the get go, in fact I may have even called and started the conversation to get the ball rolling for us to return to the Women’s Conference. The call to go was huge, I couldn’t shake it. It really made no sense to me why my heart’s desire was so on fire to go back, because frankly, it’s not an easy trip. Last years experience was wonderfully hard. Wonderful in what God did through us, hard in my flesh being this crazy American put so far out of my comfort zone. So why go back? I really didn’t know why, I just knew I was suppose to go. 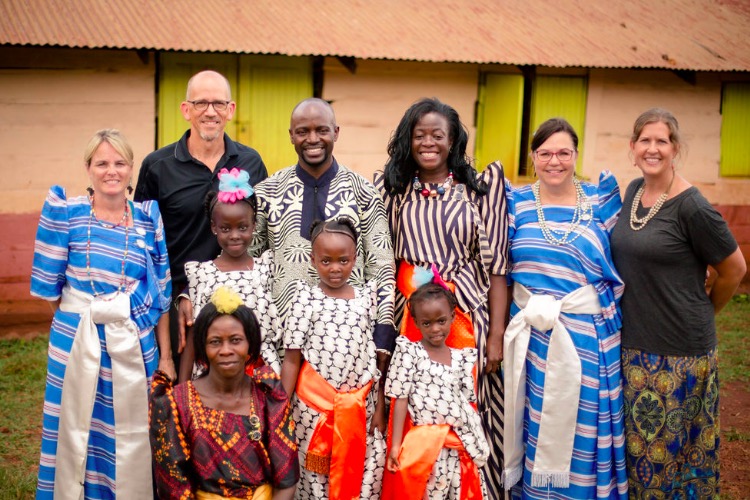 Fast forward a month into planning, and I discovered a schedule conflict with the trip. I was devastated and so conflicted with what to do. My daughter was going to be graduating high school and the week we would be gone would be during drop off time at college. How can I miss that? What does that say to her? As a friend told me, “God will never ask you to sacrifice your family for ministry.” [Read the rest of Emily’s blog post HERE.]